» News & events » News » Climate-fuelled disasters: warning people is good, but stopping the disaster is best. Here are 4 possible ways to do it

Climate-fuelled disasters: warning people is good, but stopping the disaster is best. Here are 4 possible ways to do it 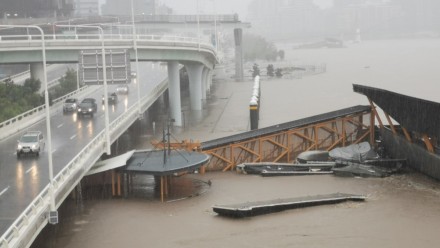 Climate change is driving a worldwide increase in extreme events. The latest State of the Climate report confirms the risks of disasters are rising in Australia.

Repeated floods have devastated our east coast. Other extreme events are getting worse too. Since 1987 bushfires have burnt increasing areas, peaking in 2019.

This is in Australia – one of the world’s wealthiest countries. In developing countries such as Pakistan, which has been devastated by floods, the situation is much worse. COP27 ended with an agreement on “loss and damage” funding for these vulnerable countries.

Yet the scale of climate-fuelled disasters is far greater than any such fund can cover. The United Nations Office for Disaster Risk Reduction predicts the world will face 560 disasters per year by 2030. Reducing emissions is a priority, of course, but even under the best-case scenarios we face compounding impacts on cities, infrastructure and services. 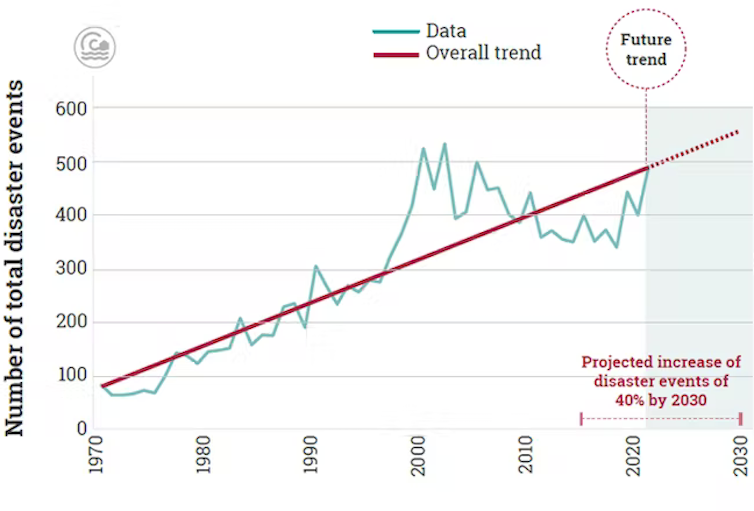 Incremental approaches to disaster management cannot keep up. We must plan for the worst bushfire, the worst flood, the worst drought.

This article offers four examples of potential solutions that are being developed to stop bushfires, storms and floods in their tracks.

Although ambitious, it’s the best way to prevent deaths and destruction. Only when that’s not possible should we pour all efforts into keeping people safe and minimising damage.

Putting out fires before they spread

In the Black Summer of 2019-20, prolonged drought, high temperatures and strong winds created catastrophic bushfires that overwhelmed firefighting capabilities. Globally, dangerous fire weather days and bushfires are set to increase by 50% by 2100. This calls for a radical change in fire management. 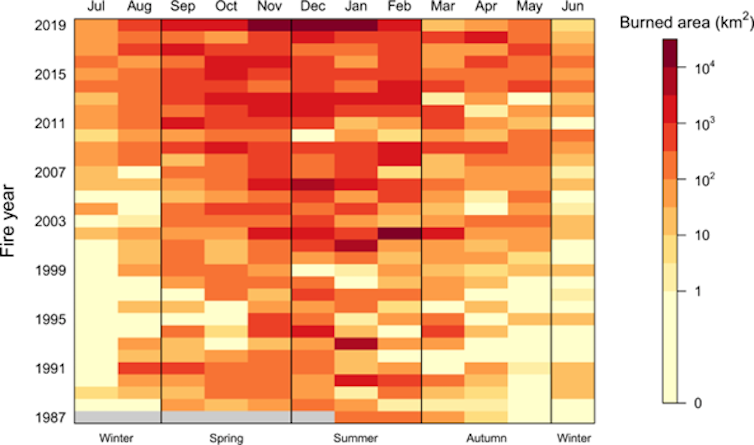 The area burnt each year by bushfires in Australia has been increasing. Canadell et al 2021/Nature Communications, CC BY 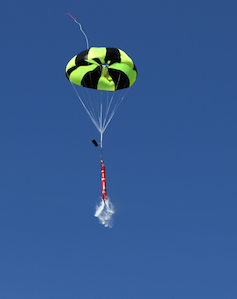 A prototype of the water glider designed to put out a small fire. ANU, Author provided

In 2019–20 vast areas were burnt – mainly because of an inability to detect and put out fires starting in remote areas before they spread and became uncontrollable. The Australian National University Bushfire Initiative is working on a new approach. It has the ambitious goal of detecting a fire starting in remote bushland within one minute and putting it out within five. We are developing GPS-guided water gliders to suppress small fires.

The ANU-Optus Bushfire Research Centre of Excellence’s high-tech solutions will include:

Climate change is expected to increase the frequency and severity of hailstorms.

In Australia, we’re warned shortly before a severe hailstorm to put our cars under cover. Yet such warnings did not prevent damage to cars and property in January 2020, when 4-5cm hailstones caused $1.625 billion in insurance claims across south-eastern Australia.

So can we stop hailstorms? Hail suppression strategies do exist. They include cloud seeding, anti-hail guns, photovoltaics and nanomaterials.

These efforts started in 1896 with the invention by Austrian winegrower Albert Stiger of “hail cannons” – shockwave generators to disrupt hailstone formation. As recently as 2018, a factory in Mexico used hail cannons to protect cars.

Today, however, the most common intervention is cloud seeding with an aerosol of silver iodide particles. The idea is that these particles cause many smaller, harmless hailstones to form around additional ice nuclei. A 2016 review found these interactions are still not well understood.

Because we haven’t worked out how to apply the technology with consistent results, it’s hard to attract financing. Supporting the industry to scale up would help advance the technology and build investor confidence.

Some countries are already doing this. China is rapidly expanding its weather modification service to include hail suppression over an area more than one-and-a-half times the size of India. It plans a fivefold increase in the world’s biggest cloud-seeding operation.

Australia’s cloud-seeding research is focused on increasing rain and snow, but could be scaled up through collaboration with other countries.

We can’t completely stop all floods, but can we reduce their intensity? Peking University Professor Kongjian Yu developed the concept of sponge cities that use natural wetlands to absorb water before it can flow into city streets, reducing flooding.

Could we turn flood-prone cities into sponges?

Nevertheless, last year the city of Zhengzhou suffered severe flooding and deaths, despite having the wetlands in place. Absorbing heavy rainfall in the city alone was not enough to avert disaster.

To solve urban flooding, upstream catchments must cope with a variety of extreme floods. Nature-based solutions contribute to a robust system. They can slow down flows and give rivers room to flood safely by:

In partnership with local councils and communities, ANU researchers are developing an Australian evidence base and guidelines for nature-based solutions to flood risk. Government agencies, insurers and NGOs will work with us to develop financial incentives.

When we build back better after floods, we may put houses on stilts or use materials that are not easily damaged by floodwaters. However, there is another solution to higher-than-expected flood levels as a result of climate change: floating houses.

The Buoyant Foundation designs and promotes floating homes attached to flexible mooring posts, which rest on concrete foundations. If the water rises, the house can float above it.

Can you imagine how different the impacts of floods in Pakistan would have been if every family had their own floating house?

Floating houses are a potential solution to higher-than-expected flood levels.

A time for transformational solutions

Traditional solutions to disasters are not working. We need to expect the worst and find new solutions.

There’s a lot of work to be done before some of these solutions are ready for broad adoption. Large collaborative research missions are needed to deliver large-scale solutions to avert the impacts of intensifying extreme events.

There is a lot of inertia in current approaches to disasters. We need to recognise the scale of the threat and develop transformational solutions that keep pace with climate change. 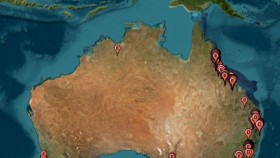