» News & events » Events » The IPCC’s latest assessment of climate impacts and adaptation options: What does it tell us?

The IPCC’s latest assessment of climate impacts and adaptation options: What does it tell us? 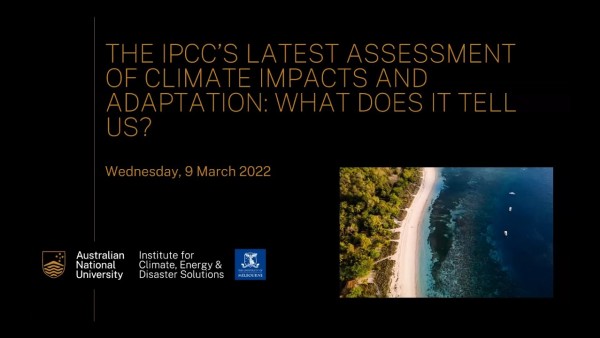 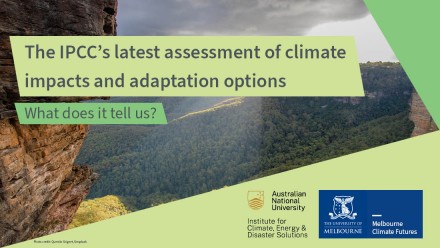 In November 2021, the COP26 meeting in Glasgow stressed the urgency of enhancing ambition and action on climate change adaptation in the critical decade to 2030, ‘in line with the best available science’.

The Intergovernmental Panel on Climate Change (IPCC) is the premier global science body tasked with providing policymakers with assessments on climate change, its implications and potential future risks as well as to put forward adaptation and mitigation options. Their latest Sixth Assessment Report, released on 28 February 2022, assesses socioeconomic and natural systems’ vulnerability to climate change, the impacts and consequences, and options for adaptation.

This joint Australian National University–University of Melbourne event gives you the opportunity to hear from report authors about the key findings and what they mean for taking forward action on adaptation in this critical decade.

Discussion of the report’s main findings by:

The event will be moderated by Professor Mark Kenny.

Mark is an Honorary Professor at Melbourne University, a Vice Chair of the Intergovernmental Panel on Climate Change (IPCC) and the Director of the Institute for Climate, Energy & Disaster Solutions at The Australian National University.

He has been a major contributor to the IPCC since 1991, with roles in the Second, Third, Fourth, Fifth and now Sixth Assessment Reports, sharing the 2007 Nobel Peace Prize with other IPCC participants and Al Gore. He helped develop both the national and international greenhouse gas inventories that are a fundamental part of the Paris Agreement and has assessed sustainable ways to reduce emissions.

Mark has worked on climate variability, climate change, innovation and adoption issues for over 30 years in partnership with many industry, community and policy groups via both research and science-policy roles. Issues he has addressed include agriculture and food security, the natural resource base, ecosystems and biodiversity, energy, water and urban systems.

Kathryn is Professor in the Melbourne School of Global and Population Health and an Affiliate Scholar at the Institute for Advanced Sustainability Studies, Potsdam, Germany. Kathryn works at the nexus of global environmental change, global health and governance issues primarily in low and middle-income settings. She holds a PhD (ANU), MSc (International Health) (Humboldt & Frei Universities, Berlin) and BA/Psyc (Hons) (Newcastle).

Kathryn regularly advises the World Health Organization on climate change and health, as well as other national and international organisations, including the Department of Foreign Affairs and Trade, the German Organisation for International Development, UNDP, Global Environment Facility, the Asian Development Bank and the City of Melbourne.

Kathryn is an editor of the journal Globalization and Health, and is a reviewer for many journals, including Social Science and Medicine, Global Health Action, and Environmental Research Letters among others.

Bronwyn is a Professor in the Department of Political Science and International Relations at the University of Canterbury. Her research focuses on the intersection of sustainable development, youth, climate change and citizenship.

Bronwyn is a lead author for the IPCC AR6 report (cities & infrastructure) and was a lead author for the 2018 Special Report on 1.5 (Sustainable development and Poverty eradication). She is co-primary investigator with University of Surrey's ESRC-funded Centre for Understanding Sustainable Prosperity, she leads the CYCLES Children and Youth in Cities lifestyle Evaluation study in seven world cities. She co-leads the Deep South National Science Challenge: Mana Rangatahi: supporting young Maori and Pacific New Zealanders with whanau, to lead climate action

She has served on the International Social Sciences Council steering committee – Transformative Research, as a co-researcher with University of Oslo’s Voices of the Future project, a lead author on UNEP's global survey of 18–35-year-old lifestyles and sustainability, and as a trustee for the UK Foundation for Democracy and Sustainability. A joint winner of UC Arts Conscience and Critic of Society Research Award 2014 and a Kiwibank NZer of the year Local Hero 2019, and she won the NZ Supreme Woman of Influence and Environment Award in 2021.

Professor Mark Kenny came to the Australian National University after a high-profile journalistic career culminating in 6 years as chief political correspondent and national affairs editor of The Sydney Morning Herald, The Age, and The Canberra Times. He is a fixture on the ABC's Insiders program, Sky News Agenda, and is a sought after commentator on radio programs across the country.

Before Fairfax, Kenny was political editor at The Advertiser having moved across from the ABC.Based in Canberra for nearly two decades, he has reported from locations as diverse as Kandahar and Copenhagen, Bucharest, and Brunei. He has covered bilateral talks inside the White House, 10 Downing Street, Beijing’s Great Hall of the People, the German Chancellery (Bundeskanzleramt), the Japanese Prime Minister’s Residence (The Kantei), The Vatican, and many others. He has also covered crucial summits including annual APEC and G20 meetings, G8, ASEAN and East Asia Summit, NATO, and the infamous Copenhagen climate talks in 2009.

A long-time member of the Federal Parliamentary Press Gallery committee, he is a director of the National Press Club. Kenny was made a Visiting Fellow at ANU in 2018 and took up a full-time academic post at the Australian Studies Institute in January, 2019.