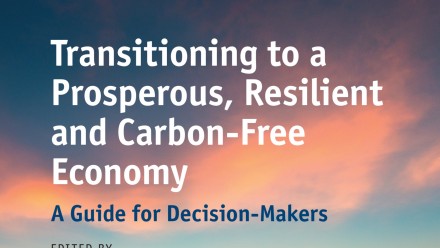 How can we make better decisions to address the issues around human caused climate change?

This event will discuss a new book Transitioning to a Prosperous, Resilient and Carbon-Free Economy: A Guide for Decision-Makers.

The book will be introduced by former Australian Prime Minister, the Hon Malcolm Turnbull, who wrote the foreword for the book, and Vice-Chancellor of The Australian National University, Prof Brian Schmidt.

The book's editors will then discuss its key themes and the implications for those working towards a carbon-free economy.

This event can be attended either in person or online. If you register to attend in person and your plans change, please cancel your ticket to allow others to attend.

This book is a comprehensive manual for decision-makers and policy leaders addressing the issues around human caused climate change, which threatens communities with increasing extreme weather events, sea level rise, and declining habitability of some regions due to desertification or inundation.

Blending technological insights with economics and policy, the book presents the tools decision-makers need to achieve rapid decarbonisation, whilst unlocking and maintaining productivity, profit, and growth.

Professor Brian P. Schmidt is Distinguished Professor of Astronomy and was appointed the 12th Vice-Chancellor of ANU in January 2016.

Professor Schmidt is one of Australia's most eminent scientists. Winner of the 2011 Nobel Prize in Physics, alongside many other academic awards and distinctions, Professor Schmidt spent most of his academic career as an astrophysicist at the ANU Mount Stromlo Observatory and Research School of Astronomy and Astrophysics before becoming Vice-Chancellor. Professor Schmidt makes a significant contribution to public debate through the media, and via his membership of bodies including the Prime Minister's National Science and Technology Council.

The Honourable Malcolm Turnbull AC. Australia’s 29th Prime Minister (2015-2018) had international careers in law, business and the media before entering politics at the age of 50.

Globally, Mr Turnbull played a leading role in reviving the Trans Pacific Partnership (TPP-11 or CPTPP) after the United States withdrew. He also struck deals with US Presidents Obama and Trump to accept refugees who tried to arrive in Australia illegally by boat.

As a young lawyer, Mr Turnbull successfully defended former MI5 agent Peter Wright against the British Government in the 1986 “Spycatcher” trial before entering business where he ran his own investment banking firm for a decade before joining Goldman Sachs as a partner in 1997. Both before and after his political career, Mr Turnbull has been a successful venture capitalist. He co founded OzEmail Limited, the first Australian tech company to be listed on the NASDAQ.

Since leaving politics, Mr Turnbull has resumed his business career. He is a senior adviser to KKR and an investor in, and adviser to, many Australian technology businesses. He is a director of the International Hydropower Association and Chairman of Australian Fortescue Future Industries. Mr Turnbull speaks and writes on a range of issues including cyber security, geopolitics and renewable energy.

Prof Ken Baldwin is the Inaugural Director of the former Australian National University (ANU) Energy Change Institute and an ANU Public Policy Fellow. He is also Director of the ANU ECI Grand Challenge Zero-Carbon Energy for the Asia-Pacific. Prof Baldwin won the 2004 Australian Government Eureka Prize for Promoting Understanding of Science for initiating and championing ‘Science meets Parliament’. He received the Australian Optical Society medal and the Barry Inglis Medal of the National Measurement Institute.

Prof Mark Howden is Director of the Institute for Climate, Energy & Disaster Solutions at the Australian National University. He has researched climate impacts, adaptation, and emission-reduction for food security, energy, water resources and urban systems. He has partnered with many industry, community, and policy groups. A major contributor to the Intergovernmental Panel on Climate Change (IPCC) since 1991, he is now a Vice-Chair of the IPCC. He shared the 2007 Nobel Prize with Al Gore and IPCC colleagues.

Dr Michael Smith has been a Research Fellow or Adjunct Senior Lecturer at the Australian National University since 2006. He has co-authored or contributed to over 200 publications on climate change, including Climate, Energy and Water: Managing Trade-offs, Seizing Opportunities (Cambridge University Press, 2015), Factor Five (Routledge, 2010), Cents and Sustainability (Routledge, 2010), Whole System Design (Routledge, 2009), and Natural Advantage of Nations (Routledge, 2005).

Prof Karen Hussey is an Honorary Professor with the Centre for Policy Futures at the University of Queensland. As an academic, Karen's research and teaching focused on the policy, institutional and governance arrangements needed to address issues including climate change, water resource management, waste management, biodiversity conservation, and the 'trade-environment' nexus. Karen currently works in the Queensland Government.

Peter Dawson is a consultant and writer and former senior officer for the Australian Government. He has worked on international trade, industry development, technology transfer, and government procurement policy. He has consulted internationally on Small and Medium Enterprise development for the World Bank and other agencies, mainly in Indonesia.

Dr Fiona Beck leads a research group focused on integrating nanophotonics and optoelectronic device design for applications in solar fuels and the next generation of photodetection technologies. She is also Convener of the Hydrogen Fuels Project in the ANU Zero-carbon energy for the Asia-Pacific Grand Challenge.

For anyone who has recently been at COVID-19 exposure site, we ask that you do not attend this event, and instead get a COVID-19 test and follow the directions of the ACT Health team. If you are sick or have symptoms, please also do not attend this event in person. Instead, you may watch this event via the online livestream. Please register for an online ticket using the 'Registration' button above.

We will be providing hand sanitizer at multiple locations for your use. Please clean your hands often and minimise touching you face. We also recommend that you wear a mask when at this event. There will be signage and protocol officers in attendance to help keep you informed on COVID safe practices. If you attend this event in-person, we will keep a record of your name and contact details for 28 days for contact tracing purposes.

PLEASE NOTE - All in-person attendees are required to check in at the venue using the ACT Government Check in CBR app. This is to ensure that the event is compliant with ACT Government protocols around hosting COVID safe events.

If you are unable to download the app on your phone due to it not having the software capacity, but still wish to attend in person, our staff will check you in using the Check in CBR app on their device upon your arrival.

If you do not have your details recorded in the Check in CBR app then you will not be permitted to enter the venue.