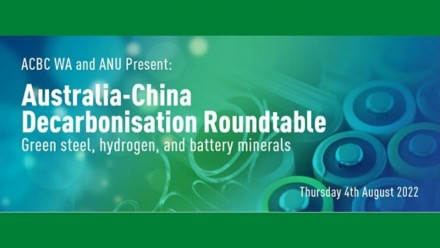 ACBC and ANU are pleased to present this thought-provoking roundtable that will explore existing and future collaboration between Australia and China on decarbonisation. Attendees will hear from leading industry and academic experts whose discussion will focus on Green Steel, Green Hydrogen and Battery Minerals.

This is the second in a series of roundtable events on Australia-China links on low-carbon technology transitions, sponsored by the National Foundation for Australia-China Relations.

Join our curated panel of experts to discuss existing and potential collaboration between Australia and China in Green Steel, Green Hydrogen and Battery Minerals.

Please note that this event will be live-streamed, however no recording will be available afterwards.

This event is the second of a series of ANU organized events on Australia-China links on low-carbon technology transitions, sponsored by the National Foundation for Australia-China Relations. To receive future briefings and notices on future events in this series, sign up by sending an email to jorrit.gosens@anu.edu.au.

This workshop is convened by ANU Crawford School of Public Policy in association with ANU Centre for China in the World and Grand Challenge Zero Carbon Energy for the Asia-Pacific.

Hon Roger Cook MLA is the Deputy Premier of Western Australia. With oversight of the key portfolios of State Development, Jobs and Trade; Tourism; Commerce; and Science, Roger has been a member of the Legislative Assembly since 2008, representing the seat of Kwinana.

Prior to entering politics Roger studied Arts and Public Administration at Murdoch University before completing a Postgraduate Diploma in Public Relations and a Master of Business Administration at Curtin University. He was active in campus politics and established the National Union of Students as its first National President.

After completing his studies Roger worked for a number of Federal and State Members of Parliament including Jim McGinty, Stephen Smith and Senator Chris Evans in policy and electorate officer roles.

Roger is passionate about Aboriginal issues and served as the Chief Executive Officer of a number of Aboriginal Land Councils, along with a communications role assisting industry and government to reach agreement with Aboriginal Native Title groups. He was previously the National President of Australians for Native Title and Reconciliation.

Roger is a strong advocate for health and fitness, competing in regular triathlons, marathons and rides for muscular dystrophy along with the walk for diabetes. He is an avid supporter of the Western Force and Fremantle Dockers.

Roger Cook was born and raised in Western Australia. He lives with his wife Carly in Wellard, and has two adult children.

Following the Keynote address and a short break, this event will consist of two sessions: