Preview of Factsheet on Mitigation of Climate Change 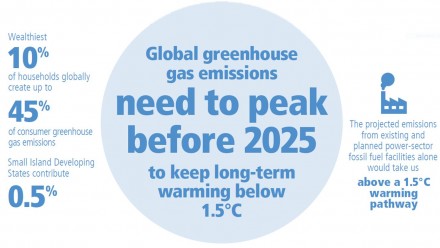 Factsheets on Mitigation of Climate Change

The IPCC's most recent report on Mitigation of Climate Change finds that greenhouse gas emissions have continued to grow over the last decade to their highest levels and that the window to limit global warming to 1.5°C is closing fast.  However, if we take immediate and meaningful action on a global scale we can still limit warming to 1.5°C in the long-term. The report also finds that Pacific nations need to be supported in finance, capacity building, and technology transfer to achieve their national commitments. The report identifies opportunities to reduce emissions which also help achieve sustainable development goals.

In partnership with the Pacific Climate Change Centre at SPREP, we have created three factsheets which summarise the report's key findings for the Pacific.

Factsheets on Impacts, Adaptation and Vulnerability

The IPCC's report on Impacts, Adaptation and Vulnerability finds that Pacific nations are amongst the most vulnerable and exposed to climate change impacts. At the same time, adaptation measures are shown to reduce climate change’s impacts on people and ecosystems. If we want Pacific nations to reduce their exposure to key risks, adaptational policy, finance and practice need to be stepped up.

In partnership with the Pacific Climate Change Centre at SPREP, we have created seven factsheets which summarise the report's key findings for the Pacific.

Along with an Overall Summary (pdf, 1.3 MB), we have six sector-specific factsheets which cover:

Factsheets on the Physical Science Basis

The IPCC's Physical Science Basis report assesses the physical science of climate change; including how and why climate has changed to date and is projected to change in future. The report finds that the world may warm by 1.5°C by the early 2030s, much earlier than previously estimated. It’s not good news for the Pacific. With temperatures heading above 1.5°C, Pacific communities are likely to experience increasingly devastating climate change impacts.

These factsheets are focussed on the key findings for the Pacific and cover four key themes: